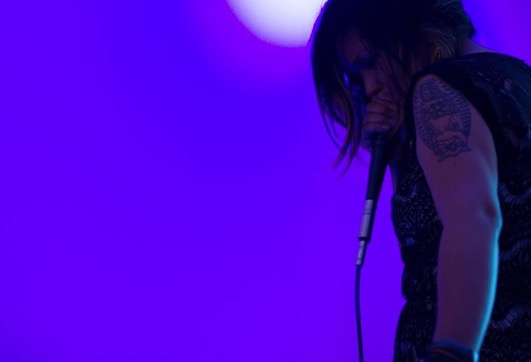 Born in Baltimore, MD, USA, Marlo De Lara is a sound performance artist and filmmaker, currently pursuing a PhD in Cultural Studies at the University of Leeds. As curator and organizer of the Ladyz in Noyz (LIN) international compilation series and collective, an ongoing project from 2008 to the present, she continues to promote emerging artists and musicians who are women.

Marlo continues to perform internationally and has toured in Australia, Europe, and the United States. She has played/spoken at the Victoria Noise fest (BC), Norcal Noisefest (US), Denver Noise Fest (US), Titwrench Festival (US), This is Not Art festival (AUS), the extended programme at Colour Out of Space Festival (UK), Threadfest (UK), Electric Spring (UK) and various locally curated satellite International Noise Conferences. Current sonic projects have focused on benefit concerts causes to raise money for refugee care and anti-racist/anti-fascist actions as well as tributes to the late Pauline Olivieros.  Ms. De Lara is also available as a speaker and provides workshops in regards to the challenges to DIY, feminism, marginalized populations, and music/music technology/music industry.

Her film ‘International Call and Response: Ladyz in Noyz’ (2016) premiered at the 2016 Tusk Festival film programme . The film’s initial public appearance was in the form of a video installation at Women in Sound /Women on Sound June 2016 event at Goldsmiths University. An earlier interactive electronic version of the project was featured at installation at Titwrench Stockholm (2015).  Her upcoming film project is concerned with the dangers of being an American, raced and racialized, in the dawn of the 2017 USA presidential administration.

Marlo writes occasionally at the ‘no-audience underground’ music blog, Radio Free Midwich, and is part of the Yorkshire Sound Women Network  and the Northern Sound Collective. Ladyz in Noyz Australia (LINA) launched in 2011 and is spearheaded by curator Lara Soulio. In 2015, Lara invited Marlo to join her in the LINA national tour of performances, speaker panels, and workshops across Australia.