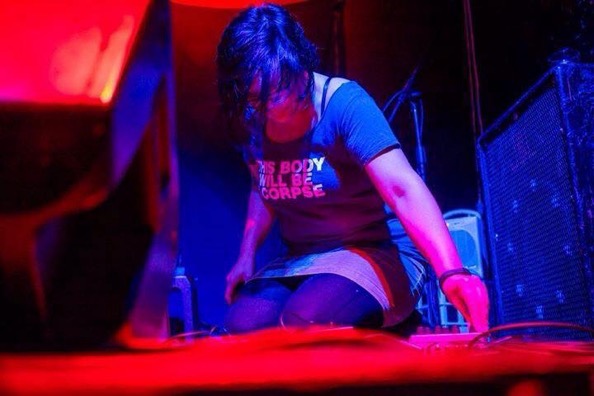 And just how the noise is less a facet of fidelity and more of an artistic tool, the music within treats conscious actions and accidents with equal esteem. Looping is used to claim ownership of those noises that dribble through the seam between intention and action, repeating rumbles of malfunctioned vocal processing or guitar resonance until they become adamant celebrations of their own cracks and jagged edges.

Soundscapes are not always everyone’s cuppa tea but when done right they really are a piece of joy in time. Callosity provides some very eerie noises and sounds and I would love to know what she was using with a contact mic to produce these. The whole piece could easily be worked into a film as it’s soundtrack but that would not be doing it justice as the visual and narrative of the film could not possibly match what she has created here.

Delayed might be consisting of just two tracks, they are of such a allure that they might be the missing elements that you need in order to make your life complete. Maybe not, but let’s pretend just to make this write-up slightly more important.

Marlo Eggplant is a fascinating sound manipulator; especially good at the fleeting use of echo opening up sudden fleeting trapdoors unexpectedly, before snapping shut and rooting about closely in squelches, scrapes, slurps and rattles.

The penultimate and final tracks eradicate much of the reverb ritualism that came before and see Marlo Eggplant much more playfully experiment with vocal manipulation. Overall though, the unemotive strangeness of the finale only brings into sharper focus the 25 minutes of music that came before. A haunted record of the recent fear and paranoia epidemic we’re all still recovering from.

On Ladyz in Noyz 3.5 (Corpus Callosum Distro), four fierce female noise artists — Albuquerque’s TAHNZZ, Oakland’s Sharkiface, the U.K.’s phantomChips (from Bristol), and Marlo Eggplant (Leeds) — compete for the cracked crown of “least compromising.” The experience is comparable to mining for minerals, only to discover a series of strange, wonderful worlds hidden below ground.